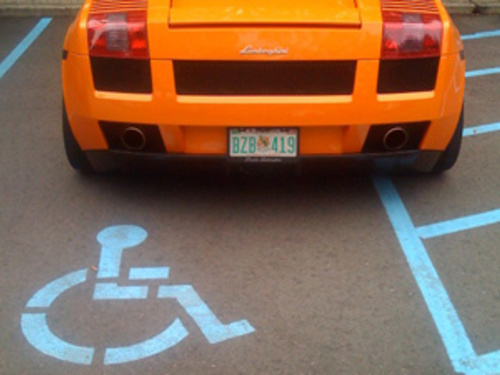 As someone who has worked with people with disabilities, I thought I understood more about that life than most people did. I volunteered during college for a few events and landed my first full-time job leading dance and fitness classes for active senior citizens. I knew they dealt with physical pain, that they sometimes felt talked down to, and that they didn't have the independence most of the population takes for granted.

But after I became a part of that world due to a spinal cord injury in 2010,  I quickly learned that there are so many other obstacles that people with disabilities face everyday. Barriers that would be completely gone if the able-bodied world as a whole gave a damn.

Handicap parking violators (Also known as "the bane of my existence"), are freaking everywhere. Before I was hurt, I literally had no idea that it was even an issue. I mean, it seriously never occurred to me that it would be ok to park there. I remember the moment I realized that not everyone had the same mindset as me.

I had just gotten home from rehab and I was going out to eat for the first time in my hometown since the accident. I still had on a neck brace and was obviously really self-conscious about it.

We didn't have an accessible vehicle so my mom and fiancé had to use a long wooden board to slide me out of the Honda CRV and into my wheelchair. We pulled up and there was a guy sitting on his motorcycle.

He was parked on the space between two handicap spots with the diagonal lines. I was sure he'd move when we pulled up, but even as my mom got the wheelchair out and we opened the door, he stayed there flirting with a waitress. We asked nicely if they could give us a little space. The dude looked at us, moved his leg and kept chatting

You know when you want to say something but you're literally too stunned to find the words? It was that moment that shined some light onto some of the negative experiences I would have throughout my life now that I needed a wheelchair. Not the worst, but definitely one of the most frustrating things that affects my quality of life because it should be the easiest thing to fix.

When I got home, I couldn't help but wish I had told that guy off, but there is another thing I wish I could do that would give me even more satisfaction. I'd write that inconsiderate guy a ticket.

You'd think that would be something only fantasies are made of, but there are actually places in the US that train people as volunteers to assist law enforcement in tackling this ridiculously huge issue.

For example, Suffolk County, New York has a handicap parking enforcement program that allows volunteers to photograph violators and take the evidence to the police station. The police then run the tags and mail a ticket to the vehicle owner. The volunteer does have to sign as a witness and show up to testify in court as well. Time consuming and annoying? Yes. Totally worth my time? Absolutely.

Officers have bigger things to worry about and I think people who park in handicap spaces  know this. I've called law enforcement to come out and give someone a ticket, but I have to decide if it's worth it. Do I wait for the police and be late for dinner? Or do I just find another restaurant? Other assignments are going to be more important in their eyes so why not have volunteers take care of it?

I know how you can lower the deficit, increase the budget and make life a lot easier for people with disabilities with pretty much no effort. We are talking free money.  Make the minimum fine for a parking violation $500, find 20 violators per day (grossly underestimated) and put 3.6 million dollars back into the budget per year. Free money.

What's also mind-boggling is that doctors seem to hand out handicap parking placards like freaking candy.

There is no possible way that that many people are in need of the closer spaces.  For wheelchair users, it's not always distance that's the issue. We need space for our transfers or van ramps as well as the added safety of not rolling behind a bunch of parked cars that might not see us when they pull out.

You know what would be awesome?  If every parking lot had a handicap spot for wheelchair users that had extra space for a ramp to come down. Those who need that spot could be issued a handicap parking placard that has a different color.

I think the disabled community is just fed up with hearing the old "I was only parking there for a minute" line on a fairly regular basis. We're annoyed with people assuming that there is a slim chance someone will need the spot while they're inside. We're tired of people leaving their shopping carts in the spaces or using a family members' placard.   I know I sound like I have a chip on my shoulder, and to be completely honest, I do. Years of having to wonder if I'll be able to park when I arrive somewhere got old a long time ago

This problem that affects so many peoples lives needs to end. There's not a new discovery that needs to be made, it doesn't require millions in funding and it doesn't even take an intelligent person to see that the solution is pretty darn simple. People with disabilities deal with enough on a daily basis and access shouldn't be one of them.